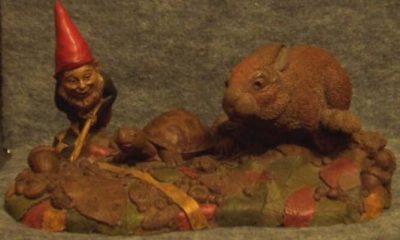 The Race
Edition Number (33)
Item # 9032
$150.00
Retired 12/31/1996
Not signed
Story card included
It’s the day of the big race. This statue, based on Aesop’s fable “The Tortoise and the Hare,” is a collaboration by Tom Clark and Tim Wolfe. A helpful Gnome is standing at the finish line, ready to wave the checkered flag for the winner. Unfortunately for the young rabbit, his over-confidence got the better of him. Thinking he was far enough ahead of his friend the turtle, he stopped to nibble at a patch of strawberries. Remembering his father’s advice that “Slow and steady wins the race,” the little turtle plodded diligently along. Now he’s approaching the finish line, while keeping one eye on the flagman and the other on his opponent, The rabbit was amazed to find the turtle now ahead of him, and is making a valiant last ditch effort, but it’s too late. The Gnome is both excitied and surprised because the winner is-the tortoise-by a hare! The rabbit’s coin is from Zimbabwe, and the turtle’s coin is from the Cayman Islands. The Gnome’s South African coin tells you that “2 Rand” the race. You may have noticed the two snails also watching the race. One asked the other who won and he replied, “I don’t know-it all happened so fast!” Certificate of Authenticity from Cairn Studio, Ltd. is not available.

Be the first to review “The Race # 33” Cancel reply