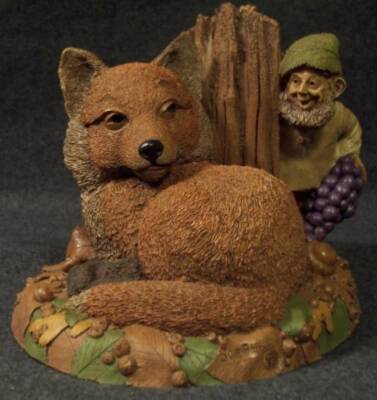 Sour Grapes
Edition Number 30
Item #6305
Retired 3/31/2000
Not Signed
Story Card is Included
(January, 1993) Actually the grapes are quite sweet, as an industrious little Gnome could tell you! But the unsuccessful and hungry fox is happier thinking he’d get no pleasure from this snack. This is the second Kindred Spirits sculpture by Tom Clark and Tim Wolfe that takes its inspiration from Aesop’s Fables. Each artist included his “signature” touch: a snail from Tim Wolfe, and an Israeli coin depicting a vine from Tom Clark. Don’t you think that, before day is done, the Gnome will share his bounty and these two will find that they really are kindred spirits?
The fox threw rocks at purple grapes
So juicy on their bower.
“They’re just too high,” said with a sigh,
“They’re higher than a tower.
I’d use a stake, but it would take
Some poking for an hour.
And anyway, I’d have to say,
I’ll bet those grapes are sour!”
The Gnomes caught sight of Foxy’s plight
And soon his eyes did narrow.
“I’ll climb the vine and then I’ll dine
On grapes in all their flower.”
He climbed the vine that would be wine
And shook with all his power.
The grapes fell down (around a pound!)
And filled his wee wheelbarrow,
And to this day, a Gnome, they say,
Out-foxed a fox so dour.
A Certificate of Authenticity from Cairn Studio, Ltd. is not included.

Be the first to review “Sour Grapes #30” Cancel reply