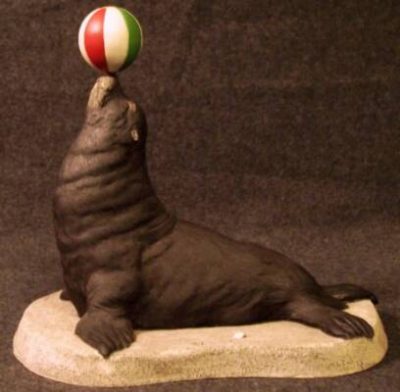 Salty the sea lion is having a ball, a beach ball, to be more precise! California sea lions, like Salty, are the animals most frequently seen performing in “seal” shows at aquariums and zoos. They are playful and intelligent animals that learn quickly, and are wonderfully talented acrobats. Wild sea lions live in two worlds: water and land. Through rather clumsy on land, they can reach speeds of 15 to 20 miles per hour underwater, just with several thrusts of their flippers. Salty is certainly at his best in the water, where his every movement is graceful as he spins and twirls in what might be called an underwater ballet. For Salty, life isn’t just a beach. A Certificate of Authenticity from Cairn Studio, Ltd. is not included.

Be the first to review “Salty # 27” Cancel reply