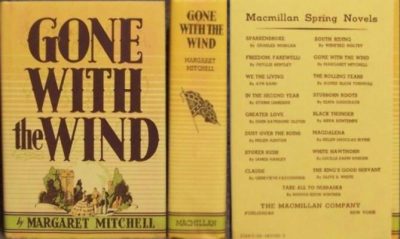 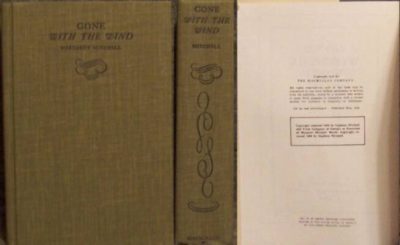 Margaret Mitchell:Gone With The Wind

The Book is a 1964 reprint of the original book that was published in May,1936 containing 1037 pages and the book has never been read. Gone with the Wind became an immediate best-seller, bringing first-time novelist Margaret Mitchell an overwhelming amount of critical and popular attention. Awarded the 1937 Pulitzer Prize, the novel was adapted as a film in 1939?an achievement that won ten Academy Awards. A historical romance set in northern Georgia during the drama of the Civil War and Reconstruction years, Gone with the Wind traces the life of Scarlett O’Hara and her relationships with Rhett Butler, and Ashley and Melanie Wilkes. The novel addresses such themes as survival, romantic love, and the societal structuring of gender and class.

Early appraisals of the novel noted its memorable characters and historical accuracy as well as Mitchell’s remarkable storytelling ability, though other reviews dismissed the novel as melodramatic and trite. Mitchell drew on her extensive knowledge of Civil War history in order to establish a believable setting for Gone with the Wind, but also spent considerable time fact-checking in the Atlanta Public Library. Biographers and critics have discovered striking similarities between real people in Mitchell’s life and characters in the novel, though whether Mitchell intentionally modeled her characters after people she knew is unclear. What remains certain, however, is that her powerful, enduring story of love and survival set in the pre- and postwar South has made Gone with the Wind one of the most popular novels in American history. SEE ADDITIONAL IMAGE BELOW.

Be the first to review “Margaret Mitchell:Gone With The Wind” Cancel reply