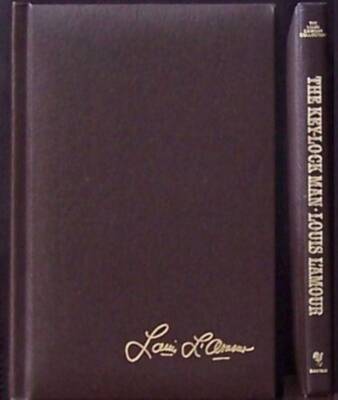 THE KEY-LOCK MAN
LOUIS L’AMOUR LEATHERETTE
HARDCOVER COLLECTION
PRINTED IN MAY 1986
1st Edition; 2nd Printing
The number line on the copyright page is 10 9 8 7 6 5 4 3 2
There is a nick in the leatherette on the edge of the book cover about half way down the book cover, that can be repaired.

Matt Keelock had led the posse for miles through the desert, but now Matt was growing desperate. He was worried about Kristina. His trip to the town of Freedom for supplies had ended in a shoot-out. If caught, he would hang. Even though Kris could handle a horse and rifle as well as most men, the possibility of Oskar Neerland’s finding her made Matt’s blood run cold. He knew that the violent and obsessive Neerland, publicly embarrassed when Matt had stepped in and stolen Kris away, would try to kill them both if given half a chance. Matt tried to convince himself that Neerland had returned to the East. But Matt was wrong. Miles away in the town of Freedom, Oskar Neerland was accepting a new job. In his first duty as marshal, he would lead the posse that was tracking down Matt Keelock.

Be the first to review “Louis L’Amour: The Key-Lock Man” Cancel reply