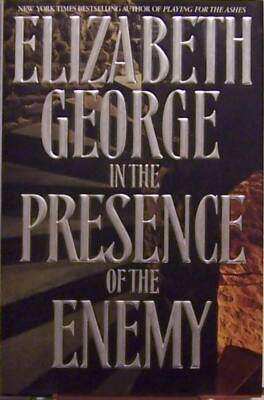 Elizabeth George : In The Presence Of The Enemy

This book is like new and has been read at least once but well taken care of and is a First Edition printed in 1996. In the Presence of the Enemy is the eighth book in the Barbara Havers/Thomas Lynley series (Lynley and Havers don’t need introduction anymore. If you are still unfamiliar with them, read the review about A Great Deliverance, the first of the series). The two main characters find themselves with another investigation on their hands; one in which every minute counts …
Charlotte Bowen, a ten-year-old girl, has gone missing. She is the daughter of Eve Bowen, a young Tory member of the British parliament, whose career is on the swift rise. Two notes are dispatched: one to Eve, and the other to the father of the child, editor of an influential tabloid; The Source, which principal goal is, after selling more copies, to bring down the Tory government.

Be the first to review “Elizabeth George : In The Presence Of The Enemy” Cancel reply